I have my grandfather's 10-year-old, wet
feet, from swimming the Mississippi night
swamps with water moccasins.

I have my sister's tears she can't
cry, in my pocket. I have my grandmother's
ingrown howl at my grandfather's

death. I have my other
grandmother's flannel shirt,
smothering me with love.

youngest brother's verbal rhythms
in my other ear. My cousins. My aunts.
My uncles. I have my niece's hand-drawn self

portrait in my breast pocket, her tender
heart next to mine. I have the clippings
of my nephew's angelic hair in one hand

and my other nephews' same in the other.
I have my eldest niece's trepidation behind
my navel.

How the pain of living thins
a heart wiry strong with hope, yes, hope.
I have my wife's laugh, laugh of hope.

No comments:
Email ThisBlogThis!Share to TwitterShare to FacebookShare to Pinterest
Labels: Family, Poetry

Life is a lapping of stones
into homes. Each day a stone
wall. Each moment housing
a stone among stones.

They sculpted your
enviable torso, a rare gift,
seeing the work of stones,
recognizing them as author,

yet time makes mortar stronger
than stone—your living
is cemented between
the building of stout houses.

Mother, your cornerstone,
chiseled your children into
cherubim and placed them atop
the five-cornered home,

in which your spirit fires
the hearth—a single solid
centered stone, among stones
lapping into a home.

More than 30 years before your
death, you set aflame your
lungs in Dow Chemical cauldrons,

where men were reborn green
skinned if at all. God
rescued and ordained you,

Gospeled the candle of your tongue
privately in your bedroom,
and a public vision ensued:


crossing the dusty river,
a parade of small sneakers,
under Christ's body, carries


To see the person and not the
actor, I must push past
the man staged upon your death

and find you, Paw-paw, behind
the curtain in mundane life.
There, on your recliner,

a meaty hand around a peanut
jar, the other rests with a remote
on your belly. Upon seeing me,

I addressed a similar thought eight years ago and, for kicks, am including the same pointless disclaimer: I realize that I'm focusing on a narrow aspect of society and indirectly ignoring other aspects.

Many act as though they're in their living room 24/7, and more importantly, they act as if they're alone, paying no respect to current company.

It's easy to blame New York City for the selfish motivations of the average citizen, who literally has to hustle to, through, and from work; he also has a long, round-trip commute for his job, whether by foot, bus, train, or car, in which for sanity's sake, he can't be overly conscious of his "neighbor" because having that many neighbors places a limit on the capacity of his consciousness. This single-minded focus is why rush-hour commuting is the quietest train ride: each is a solo universe unto himself, purposely unconscious of his neighbor, giving attention to a book, phone, music through headphones, or work-a-day thoughts. 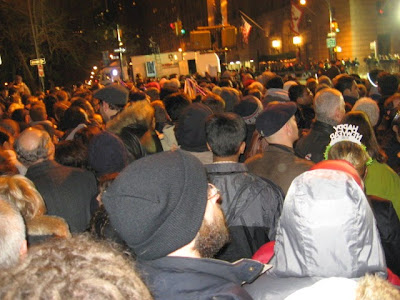 What about a New Yorker's downtime? Why is she seemingly selfish in leisure, too? She's motivated by the same reasoning. Whether going to the theater, a dinner, a stroll in the park, or staying home for a Netflix binge, she still thinks: "How do I get the most out of my downtime? How do I recuperate most efficiently?"

Uncommon decency requires empathy, or at least attention, toward others. And we feel we don't have the time, which is understandable if not acceptable.

What about non New Yorkers? All the above remains true, but with fewer people, distractions, and commuting concerns to use as poor justification.

Technology isn't the enemy, but advertising and social networks, more than ever, have helped each person realize that "I am the center of the universe." More than ever, people accumulate knowledge based on their experience, and establish, even unconsciously, values according to this knowledge, which creates a void of critical thinking, a void of attempting to see the perspective of other persons and cultures.

To Kill a Mockingbird is taught to American, high-school sophomores because the theme, "don't judge a man till you've walked a mile in his shoes," is important for people who are just beginning to value their own experience, to reject their parents' advice, and to exercise their independence for the first time in their lives. Thinking about why we think and act the way we do is important, but thinking about why others do the same is equally important. This is the only way we can understand what motivates us and them, and the only way we can determine if it's a good motivation.

Blind self absorption and self seeking helps none other than the self, and even that's questionable.