A few years ago, Levi's used Whitman to advertise their jeans. At first I was repulsed by the idea, but then I realized Whitman would have laughed and likely loved this.

I believe the voice over is taken from Edison's recording of The Bard. Let's become "perennial with the Earth, with Freedom, Law and Love".

No comments:
Email ThisBlogThis!Share to TwitterShare to FacebookShare to Pinterest
Labels: Video

1.
A man got
sick on the
train

Veins of the
city rerouted
iron

I'm on the
right track to
work


No comments:
Email ThisBlogThis!Share to TwitterShare to FacebookShare to Pinterest
Labels: NYC, Poetry

Time to yourself
without distraction
encourages poetry

On my gray shirt
somewhere is a pin
of Emily Dickinson

Aggression does not
happen
the sun is red

At an antique
shop in Phonecia I
met Robert Bly's Sixties

We're all displaced
persons until we return
from whence we've come

No comments:
Email ThisBlogThis!Share to TwitterShare to FacebookShare to Pinterest
Labels: Poetry

Kyle Erickson is a co-creator of the poetry series Kick Assonance, which has been noted by the Poetry Foundation and The Academy of American Poets. Kick Assonance has been a Time Out New York “Critics’ Pick” and “a notable New York Event”. Kyle’s work can be read in This Land Press, Promethia, and B’More Poetic. His first book Enduro’s Lament will be released at this reading.

Christian Ericson was born in San Francisco, California, and raised in New England. He lived in Savannah, Georgia, for several years before moving to New York in 2001. He’s read his poems at KGB Bar, The Bowery Poetry Club, and other NYC venues. He is a Time Out New York “Cristic’s Pick”; he also is a visual artist and designer whose work has been shown internationally.

Carter Edwards is the author of the forthcoming novella “Knucklebone” and is the prose and audio editor at Pax Americana. He received his MFA from The New School. He is a regular contributor to BOMBlog, FAQNP and the Brooklyn Review. His most recent work can be found in Red Line Blues, LyreLyre, The Sink Review, Food-i-corp as well as Hobart, which nominated him for a 2012 Pushcart. His short story Illfit, is being adapted into a piece by the Royal Ballet of Flanders. He is also a Literary Death Match champion and has the medal to prove it. His forthcoming short story collection The Aversive Clause won the 2011 Hudson Prize.

Last year was a good year for Susan Scutti: her collection of poems, The Commute and her novel, The Deceptive Smiles of Bredmeyer Deed were both published. Her poems have appeared in The Christian Science Monitor, New York Quarterly, The Outlaw Bible of American Poetry, Philadelphia Poets, Tamarind and other reviews.  Susan continues to be a fan of brussel sprouts despite the sudden overshadowing popularity of kale.

Everyone's a universe,
entropy's the scene.

Smashing beer pitchers in each
others' faces, each small bird
watches your package, and
guerrillas moan for your olives.

I got your back, brother.

Valencia ferias painted you red
with tomatoes—"Good for your
man parts," I said, so you'd remember.
Now your whispering, incense

through the ceiling, cries for Christ's
ear. "Your shoe is untied," I say
as I bow, "watch my back, brother."
The kidnappers' guns fired past your

fleeing through a forest. "Lord Jesus
Christ, let me survive! I will do what
you will!" The morning carried your
confessions to Mom and Dad. Family

cried across the continent. If you had
died, I'd have sung this over your
casket: "He knew who he lived for;
why he died. Do you?

I got your back, brother." 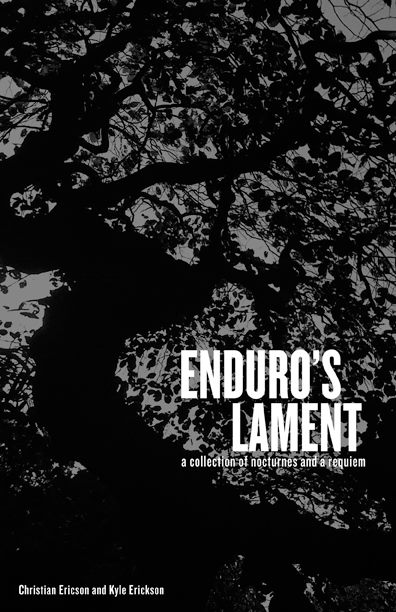 My sister bought my first book produced by a printer, which will be released on November 2nd. If you know me, you know what this means. The pain and pleasure of a poet reside in times like these. If we can increase the beatific forms of love, we should.

I'm grateful for every kindness received. Try to be kind people. You only have one life if you're lucky.