Poets Are Few and Weird and Amazing


When Leslie and I finally stumbled upon the patch of grass where the New York City Poetry Festival was being held after crossing the entirety of Governors Island, this was the the first thing we saw. 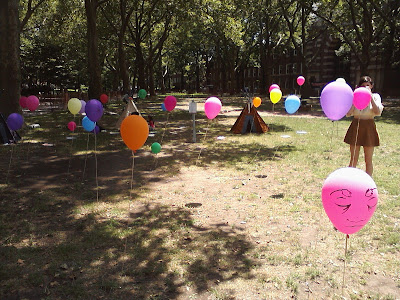 Poets are weird. This was the "poetry forest" where children could tear writing prompts off the floating heads of dead poets, and play in tipis.

It took us a while to even find the festival because there weren't enough people at it to differentiate them from any other group on the island. Here is the billboard where you could graffiti or leave a comment. 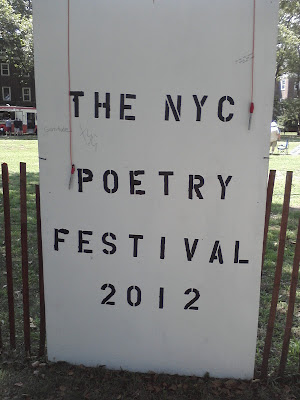 Yep, Les and I were the 3rd and 4th persons to sign the board midway through the second day of the fest. I felt weird before we even entered. The park was a triangle with a stage at each corner, but it was so small that you could simultaneously hear poets from all stages. I first thought: Who are these strange people? And then, I'm not like this, am I?

After we paid our five bucks and grabbed a stage schedule, we went to hear Thomas Sayers Ellis "read", which he didn't do. He made oral sounds and moved while his friend accompanied him on sax. It was great. Those who've been to a reading know they're boring. A good poet will attempt to entertain or be engaging, but most are simply not extroverted. So they're boring readers, regardless of how good their poetry is. Ellis was riveting. He was entertaining though I have no idea what his poem was about, which is the opposite of what a poet usually wants, and Ellis' point -- I think.


After he broke the ice the rest of the day was wonderful. Valzhyna Mort read from her most recent book. She bit and hissed at the audience with her pronunciation, and her poetry is so sexual and sensual that it was a little disturbing. I liked it of course. Mark Strand closed the festival by reading from his newest collection, Almost Visible, that's composed of prose poemish things or paragraphs. Some read like Koans. The crowd enjoyed "Dream Testicles, Vanished Vaginas", which I can't explain, just grab the book if you want to laugh, cry and think.

On our way back home we saw a bunch of kids crawling on Lady Liberty's face. 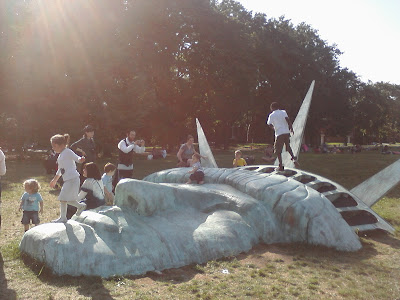 Over 200 poets read at the festival. We only caught the latter half of the second day, but if The Poetry Society of New York decides to do it again next year, I'll be one of the weird ones there early. After it was all over, around 30 of us went to a bar where Strand read while girls cheered like he was a rock star. It was bizarre and amazing.