Normal Is Your Neighborhood

My first blog post was about the scents of New York because it floored me how strong and multifarious the city's summer scents are. Leslie and I also couldn't get over how many wonderful things you could do here for very cheap or free -- the first month I was here I saw Chuck Klosterman read at the now extinct Borders in Chelsea. The things one takes for granted in his hometown are illuminated with fuzzy nostalgia when he's homesick.

I asked a friend who was born in Queens if she ever had epiphanies from the powerful impressions the city creates around almost every corner. She asked what I meant. I said that the sunlight off the Chrysler building at sunset stabs my heart. She said she never had any experience like that -- well, she said, maybe with shoes.

My close friend Zhanna was born in St. Petersburg and moved to Brooklyn in her youth. I asked her the same question and she said, Of course! at least weekly; just the other day I was in the Village when -- .

Did Zhanna relate because she was a transplant like me or is my Queens friend a Philistine? Maybe both or neither, the power of the city's impressions likely depends on the sensitivity of the soul that perceives them. But this realization made me think of the endless star-filled Oklahoma sky that I rarely paid attention to in Grove growing up, of my mom's hands cooking pancakes on Saturday morning, of the smell of Portland dust in my clothes, of my grandmother's singing voice over the pulpit. I have to consciously think of all these things now because they are not here to unconsciously impress me, but I can get waylaid by much here if I just remember, as one poet said when speaking of how to be a poet in New York, to just "look up". 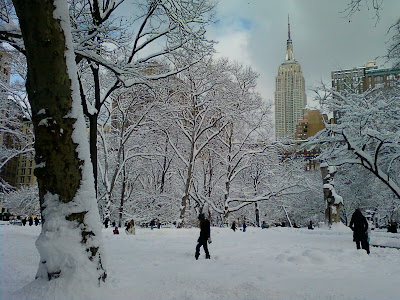