If you're free on Thursday, some friends and I are having a reading. Please come on down. 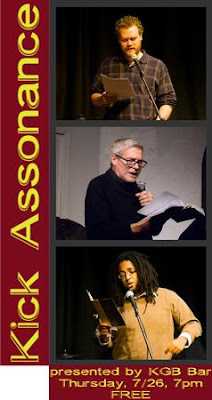 KYLE ERICKSON is co-creator of Kick Assonance Poetry Series. His poetry and writing blog, okieinthecity.com, was named a "Top 101 New York Blog" alongside such well-known sites as The New Yorker, Time Out New York, Gawker, and more. His series has been noted as a Time Out New York "Critics' Pick," "a notable New York Event," and his work can also be seen in the literary journal, Promethia.

STEVEN LEYVA is the author of the recently released book of poetry, Low Parish, and co-creator of the poetry series Kick Assonance. A graduate from the University of Baltimore with an M.F.A. in Poetry, his work has also appeared in Welter magazine.

“Low Parish is an ambitious debut of a voice that’s passionate and tough, honest and intimate, bookish but without unnecessary irony. This voice pursues its losses and desires in urgent muscular rhythms and ceaseless syntactical staccatos. Paying its tribute to real and mythological places, Steven Leyva’s poetry runs along the bloodlines of fatherhood and brotherhood, forming a beautiful, deeply felt collection.” –Valzhyna Mort (Author of Factory of Tears and Collected Body)

STEVE DALACHINSKY is a PEN award-winning writer whose books include A Superintendent's Eyes, The Final Nite & Other Poems: Complete Notes From A Charles Gayle Notebook, and Logos and Language. His chapbooks include One Thin Line, People/Places, In the Book of Ice, Blue, White Dog, Portuguese Letters, and Contemporary Poetry. His work has also been extensively published in both on and off line journals.

Arrive early to snag a seat. They go fast. See you there!