I found a letter I had written to General Schwarzkopf as an assignment for my fifth-grade English class. My grandmother sent it to me a few years ago. Apparently, I felt I could colloquially address the general.

Little me was self-conscious about being small for his grade, but other than that, was an egotist who talked about himself for the majority of the letter, even squeezing in how others say "I can run fast and they say I'm strong". 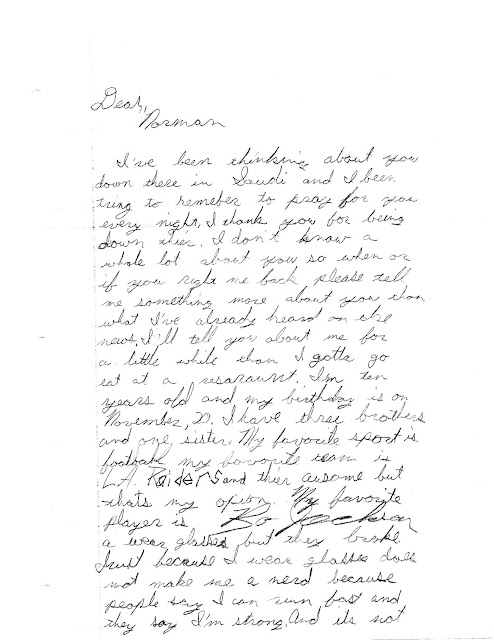 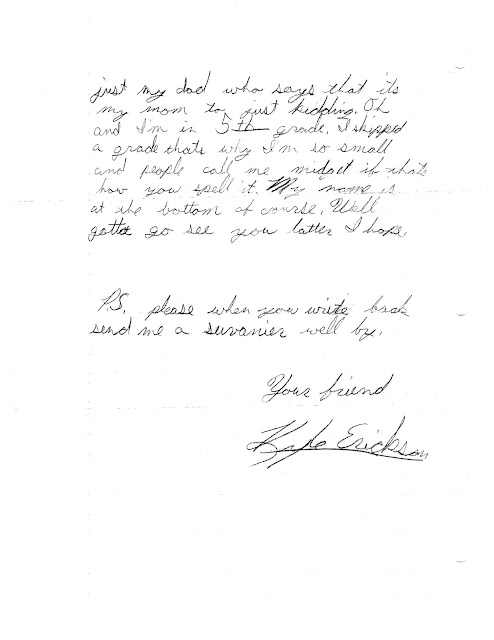 I've been thinking about you down there in Saudi and I been tring to remember to pray for you every night, I thank you for being down thier. I don't know a whole lot about you so when or if you right me back please tell me something more about you than what I've already heard on the news. I'll tell you about me for a little while than I gotta go eat at a resaraunt. I'm ten years old and my birthday is on November, 20. I have three brothers and one sister. My favorite sport is football my favorite team is LA. Raiders [emphasized with square lettering] and thier ausome but thats my opion. My favorite player is Bo Jackson [emphasized with large lettering] a wear glasses but they broke. Just because I wear glasses does not make me a nerd because people say I can run fast and they say I'm strong. And its not just my dad who says that its my mom to just kidding. Oh and I'm in 5th [emphasized with large lettering] grade. I skipped a grade thats why I'm so small and people call me midget if thats how you spell it. My name is at the bottom of course. Well gotta go see you later I hope.

P.S. please when you write back send me a suvanier well by.