On Crazies and Hugs

I think a part of the reason why they are is because city life complicates human interaction with others and our environment. In my Insanae excerpt, the narrator mentions the phenomenon of personal space being on its head here. A city dweller is very close to many people he ignores daily. In Oklahoma, we waved to neighbors while driving by -- we acknowledged each other even if we didn't talk.


Yesterday morning a tall thin man was yelling gibberish and curses in a French accent and banging his metal cane on the floor of the train while persons sat on either side of him, close enough to touch shoulders and thighs, thanks to rush hour. A woman read; another man looked away; and a Frenchman yelled and hammered between them.

In "The Diary of a Madman" by Nikolai Gogol, the narrator says "They don't listen to me, they don't hear me, they don't see me". One of our base desires is to congregate and seek acceptance. Humans need attention, not the celebrity most kids want. Celebrity is another crazy. Those wild for celebrity believe they'll self actualize when many people see them. The insane have no self because no one does. We need quality attention maybe best demonstrated by a hug. A hug says "you are here and I like you".

I don't plan to start hugging bums, but maybe I will my friends more often.

how do they know when
to give and take in the conversation?

There's no silence till they
both check their phones
on the Manhattan bridge.

It's annoying.
But sublime too.

Their rhythm and inflection
continually unfold like
waves from the shore...
during a storm.

Though I look like I'm taking notes in this conference room, I'm actually doodling. 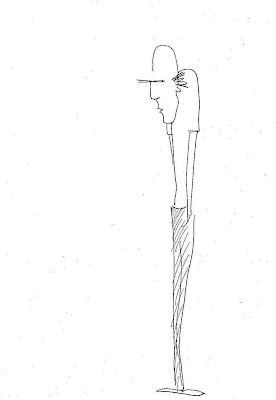