Brick walls, beers, and artistic veterans of the Bowery crowded the stage for a 45 minute stop on the NYC Lit Crawl.  Les and I came to see only this event because Bob Hollman, the creator and proprietor of the Bowery Poetry Club, was reading with friends, and because I was leery of going to any performance event on 9/11.  Though this day brings the city and much of America together, it's gloomy.

New Yorkers above all have a right to be gloomy. But they weren't. 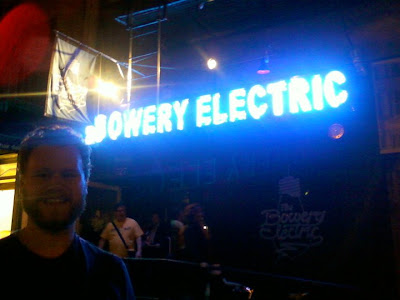 The host opened with silly one-liners and the truth that a single event has turned the nation into a Kingdom of Fear.

Hollman got the night rolling, his cigarette baritone dancing tenured poems a la tango and retro and humorous.

But Jim Feast had us in stitches with a piece on Bloomberg's losing sleep, planning his election on the night of 9/11: "Why the towers? Like a moth to the flame, the terrorists chose a skyscraper -- not a bungalow or cottage or motel. And if only a skyscraper were in the the Bowery, a center of poets not stockbrokers, the city would be clean of vermin and clear for commerce!"

Steve Dalachinsky closed the night with a poem "written too soon after the event, but what the hell" that made me warm to gloom, to NYC, to being here and now.

Before the-powers-that-be traded artists for towers in the Bowery,  before terrorist smashed faith for fear with a plane, these guys were here and still are.