Bus from Baltimore to NYC

Bus ride from Baltimore to NYC—with load of passengers boarding at Wilmington, Delaware, 2 girls hop on—both tall, thin, attractive, both dressed same—tight black pants and gray hooded sweatshirts. After sitting and texting and adjusting her bag and standing to take off her sweatshirt, the brunette sits back down next to me and she smells nice. She pulls out a book of theology and highlights some phrases as she reads. College? Must be. But I get a kick outta how she enjoys being seen. She catches my glance while she leans forward to text. She smells good. Like soft clean clothing. Light fragrance. Nothing special or particularly alluring—just nice to smell something other than bus funk and old lady hair and Chick-fil-a and even my own musty smoke laden clothes. Small legs, thin—funny. I find her attractive but no thought of sex, just thoughts of college years and energy and youth and different priorities—that attractive life. Keys, phone, iPod btwn her legs on seat—she juggles them—changing tunes or txting friend who sits in front of her—texts of me or reading or nonsense or whatever? As I sit up to write this, she settles for the first time ‘cause I’m hunched over journal and she has no chance of side eye glance. Maybe I’m giving myself too much credit. But she smells nice. A small comfort on a long trip. She stands and startles friend with tap on shoulder before walking to restroom in back. Her bag has Andy Warhol’s face and banana on it. I’m incredibly curious about her school but don’t have courage to ask. But mystery and thought stimulus are better than movie. Thinking now that she’s probably a moron slut—why not? She only peaked my interest with her reading theology. And I’m the chubby hairy guy sitting next to her that smells of stale smoke. How many times have I looked out the window since starting to write this, to think and not look at her tiny funny legs pants boots? She's back.  Yeah, she’s definitely texting her friend in seat ahead. “Anne, Fordham University” reads her badge attached to keys as she stands to leave parking bus.

I've failed, as my faithful readers have already recognized, in my goal for WSB -- one a day for 30 days.  So, I decided to wrap the last three up in one fell swoop by posting B-sides of WSB.  These weren't written today, but were rejected journal entries of past days.

#29
breasts in lace and lights
pass windows of Q train.
bosoms of another era

And some bonus tracks...

Rachmoninov piano concerto no. 2
through the birth canal, loss of
innocence, grave, and sky 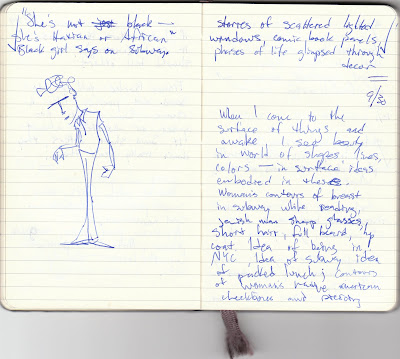 Though it seems I edited a WSB, that's actually to accurately quote the speaker.

catapult sling from tunnel to
tunnel over hudson, and
lucky glimpse of purple horizon

This morning, Black guy on Saturday Q was having living-room reminiscence with Miss Ella Martin in his head, out loud, real loud -- he spoke 4 or 5 character dialogue. He gasped between characters and spoke as fast as possible.

The man pauses, looks around when the train stops, rocks from side to side. The white noise of train movement begins and he begins again.  His head's on a swivel, attempting eye contact with all on train.

"Holly, do you remember what color the doors on the double R train, in 1877?
Orange, they were orange, Miss Ella Martin.
That's right, Holly, I was there when your great grandma died, I was there."

He covers his right ear as if he's talking on the phone and picks up his bag and sits directly next to a redhead.  He leans toward her and continues his dialog as loud as before.

Mrs. Okie and I were listening to Mozart piano concertos and drinking coffee in our apartment on a lazy Sunday when I went to turn the album over and heard some nice jazz coming through our open window.  I said "Is that coming from the street?"  Our neighbors tend to play rap, Micheal Jackson, and crummy elevator jazz.  Sure enough, I looked out the window and saw a keyboardist and bassist playing on the subway overpass, and a gathering of locals on the other side of the street.  We shed our pajamas, slung on some jeans and t-shirts, and grabbed the camera.

The murals are painted on a particle board barrier that surrounds a vacant lot next to the subway station. A Brooklynite in front of a mural of Brooklyn in Brooklyn. Sylvia's condiment portraits were my favorite. And here are the culprits of swinging street jazz. These were all locals affiliated with plgarts. Days like this make me glad we can no longer afford to live in Manhatan.

I'm going to say nothing but that I recorded this song with my beloved brother 6 years ago.  He plays the guitar while I sing. This song is for him and about him.  I love you, Nic.


No comments:
Email ThisBlogThis!Share to TwitterShare to FacebookShare to Pinterest
Labels: Audio, Music