My baby brother, Drew, has had a tough last few years. He ran away from home a couple times last year, lived in his car, and scrounged food and gas money where he could when he wasn't at work delivering pizza. He's 18, now back at home, and can't help but give my parents grief. Can't say I didn't give 'em a little hell myself at his age.

At 7:30 yesterday morning I received news that he'd fallen asleep while driving a friend's new Dodge Ram truck. His truck veered across the lane of on-coming traffic, shattered a concrete culvert, flipped end-over-end, and landed top side up. He was life-flighted to the nearest major hospital in Joplin, Missouri. He was alone in the truck.

Around noon, I received a text message from my sister saying that he was allowed to drink water, which meant he didn't need surgery. But they were still waiting on tests.

At 4 p.m., my mom called to say they were driving home with him asleep in the backseat. She said he had scratches on his hand and his chest was sore from the air bag. She said he was okay and that he still didn't realize he was a living miracle. She said he was back to acting selfish (the family hadn't eaten since that morning and spent 6 hours in the waiting room, but Drew didn't want to stop because he was embarrassed to be wearing scrubs).

After I received the first notification that he had been in an accident, a crazy collage of images screamed through my head. I had lost a high school friend in a motorcycle accident on the same road. After his crash I received a similar notification: "He's been life-flighted to Joplin. He's conscious, but has a couple broken bones. He was wearing his helmet and is talking." The next day he was dead from internal bleeding.

I was talking to my mom on her cell phone when they pulled up to their home. I asked if Drew was awake and if I could talk to him.

His voice started to shake when he said, "Yeah".

"I'll let you get some rest. I'm glad you're still here. Let me talk to Mom."


And then I heard him yell for Mom to come and grab the phone. And she said Yogi, his dog, needs to stay in the bathroom because Kylie, my 2-year-old niece, is in the house. And he said Yogi should go outside. And she said but Yogi runs into the neighbors yards. And he said she should take him on a walk. And... 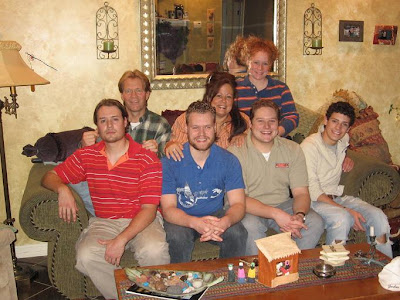 Parents and siblings. Baby brother is on far right.

I have a big messy southern family, which I love dearly. During times like these, I love them even more.