While black vines of arms spiral
around a guitar that chug chug chugs
a broken moan, a vibration
through the rush hour commuters in the
darkness under Grand Central,
a tall boy lowers his pelvis, with a
wide stance, to his girl,
crotch to crotch,
soft chest to hard chest, and
wraps his hands around her ass.

Remember summer nights in our Tulsa apartment?
We were wrung out and wet, filling
the room with the aroma of sex, exhausting
the ritual of love grip wrapped around hardness.

Two nights ago my dream was shattered
with your sobbing. And then you spoke and
echoed in the hollow of our bedroom, and
I saw New York descending into you,
the spotlight of a thousand comedy basements
penetrating and filling
you with restless shadows,
swelling you with sorrow.

Remember when I'd blush at
your public kiss? In the hum of Brady Theatre
when I dared to touch your hand, colors
spun out the speakers.
I got hard just smelling your hair.

Tonight alone outside Whiskey Sunday,
the spirit of New York is
a ghost of a ghost,
sprawled, aching, crawling
over the tree tops of Prospect Park.
But -- uno, dos, tres and the dishwasher's
apron twirls as he lifts and spins his girl
in the street light of Lincoln Road.

This morning you told me I fondled
your breast in my sleep till I
turned over on top of you --
you said, "Baby, I don't think you're awake,"
and I relaxed, covered you,
pressed you into the mattress.

The long winter is over, baby.
Spring is here.
And you're wilting
among the applause
of tulips in the park, the applause of
footsteps off the Q, the clatter of
early leaves...
and the laughter, the laughter amplified by your own microphone.

Lillies of the Field

When posters of paintings were hung in the Atlantic/Pacific subway station, my first thought was that the economy has become so bad that MOMA thinks they'll replace $20-a-ticket European tourists by advertising to Brooklynites who transfer from the B to the 2 with their morning coffee from Dunkin Donuts.

I liked the Hopper. And the 14 foot "Reflections of Clouds on the Water-Lily Pond" turned-on some commuter so much that he got it half rolled off the tiled wall before he got caught. 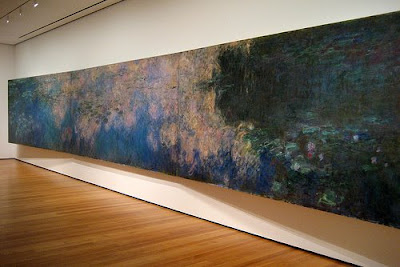 Photo by wallyg
I liked that the paintings made me want to stop and observe, though I'd often grab the express Q at 14th Street on my rush home, skipping the transfer all together.

Tonight after coffee and talk with a friend about how writers observe so much that they observe themselves into a fix, being unable to write because every thought is not what they really want to say, I got off the R to transfer to the Q, eager to stop and take in the paintings.

And, of course, they were gone. After 3 months the advertisements were back, and I never took advantage of the underground MOMA exhibit just two stops from my apartment.

I originally wrote this a year ago as a prose-poem: here. A friend advised me to turn it into a poem so the reader would be forced to face the music of the crash. So, here it is. It's not in it's final draft, but I like it.

She buried her mother six months ago

She lost her boyfriend 35 years ago
after he saw her swollen head and body
contorted in the hospital bed
after the paramedics ripped her
feet from the brake pedal, disregarded
the banana-peeling skin, and
assuming she was dead, shoved her eye back into its socket
after her Benzedrine crash was made
manifest in sports car confetti—
shrapnel, hubcaps, axles, glass, blood, oil,
un-hung ornaments under a Houston-highway lamp post
after her last red-eye as a stewardess

She always called her mom to talk
For six months she called Leon,
Now she calls the niece who brings
groceries and cigarettes

She finishes her joke and hangs up the phone

Her head grows heavy and
presses down into the wilting arm chair,
spine contracting like a rusted spring,
until the pressure releases and
wets her cheek

She picks up a third cigarette

9 a.m. Hopped on the 4 train and sat next to this darling silent girl -- maybe 4 years old. She was a serene angel in a pink dress with huge eyes, sitting and starring at nothing while, next to her, her mother struggled with her younger sister who was whining and flailing. When the train braked, the angel slightly raised her arms out to her sides for balance.

The mother stood and told the younger sister to "come on". The angel slid off the seat and kicked the hell out of her sister. She yelled in her face, "It was an accident!"

Made me laugh all day.