Monologue of an Ignorant Observation

I'm not going to go into the political and sociological evolution of America because I don't feel like writing that much, but lately I feel we resemble the height of society that has been seen in other cultures. More specifically, the beginning of the downward turn after the height. I've seen this primarily in our communal ideals and approach to work.

But before I jump on those ideals, I wanted to draw a quick parallel to the golden age of the country that "discovered" America. The age began in 1492. This date is notable in Spanish history, not for the discovery of America but for the conquering of the Moors at Granada. Spain had finally set in motion the end of its Jewish and Muslim population, but by doing so, had rid itself of it's merchants and craftsmen. As Spain pushed all the craftsmen and merchants out of the country, it built up its military and cultivated its greatest art. While Velazquez was painting "Las Meninas" and Cervantes was writing Don Quixote, Charles V brought together the worlds greatest empire since Rome. 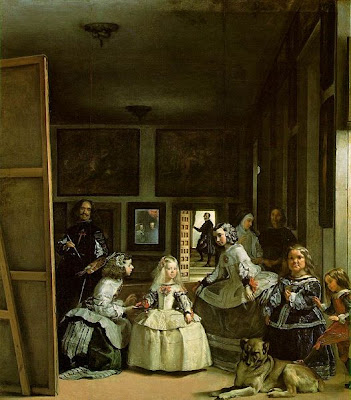 Though Spain was very wealthy, it spent all it's money on the military. Though Spain was an agrarian state, it had pushed out all those who worked in the fields or made the tools necessary to do so. It had no producing economy and no one to do the work even if it wanted to produce something. Everyone sought the idealism of the Renaissance and didn't have time to get their hands dirty.

What made me think of all of this? It wasn't that America is known around the world for it's military, culture, and "consuming" economy; instead it was something my wife said. She said, "I work in a video store and we have to watch VHS tapes because the DVD player is broken; and we have to watch them on the small screen because the large screen isn't working either. I work in a video store and no one can fix the player or the TV."

Without thinking, I said, "Of course not, they're all college students."

Email ThisBlogThis!Share to TwitterShare to FacebookShare to Pinterest
Labels: Thoughts