Dr Robert and His Similarities to the Potted Plant on E.T.

My bamboo plant is the barometer of my overall well being.

My wife, Mrs. Okie, and I got a bamboo plant, along with a few other plants, while she was going through a nurturing phase. All the rest of the plants died because we are egocentric and not nurturing, but Dr. Robert survived. (She named our pseudo-cacti-plant, "Chubbs," and I named our bamboo after the Beatles song. Chubbs fell off a shelf and never recovered from the trauma while Dr. Robert danced by the hand of Mrs. Okie to the song he was named after.)

I initially thought it was a good idea to have living things that you didn't have to potty-train in the house. But instead we had dying things. And it was very depressing. We'd come home to see all these brown wilting creatures that looked like the vegetation of the Bog of Eternal Stench. I eventually had to cart them all off to the dumpster while Mrs. Okie was out running an errand (she knew her darlings were in pain, but she couldn't put them to sleep).

But Bob made it (we rarely address him informally, not because we have intimacy issues, but because we have a Sponge Bob Square Pants stool. So when we say, "hand me Bob," we are talking about the stool and not Dr. Robert.) Dr. Robert stuck around for reasons that could only be described as spiteful. In plant speech he said, "Get bent! I'm not going anywhere!" And he became family.

Well, as stated in my profile, we moved here three weeks ago. We were concerned and didn't think Doc was going to survive the transition.

We had our neighbor and dear friend baby-sit him while we spent a week, prior to the move, apartment hunting. I think our neighbor had a rough week, because Dr. Robert didn't get much attention and began to look like the late, traumatized Chubbs who took the dumpster dive.

But he pulled through. Even after the 30 hour Penske-truck-ride. In fact, we set the Doc outside on the fire-escape to get some sun, and I accidentally knocked him over and broke his vase while stepping out for a cigarette. Pieces of the vase and the pebbles that supported him rained-down five stories, ringing and bouncing off the lower levels of the fire escape, but Dr. Robert only fell a couple of steps. Now he happily resides in a red plastic cup on top of our CD tower, and has never looked better.

I'm telling you The Doctor's biography because his phases in life directly correlate to my own. Like E.T.'s potted plant that mirrored his and Eliot's well being, Dr. Robert mirrors mine.

It was hell looking for an apartment in the city (Doc felt our pain).

We were exhausted but excited during the physically demanding move (though his leaves remained wilted, his color returned). 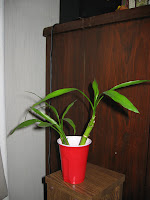 Everyday life in New York is a huge change from Tulsa (the vase to the plastic cup).

But we are happier than ever, now that we live in the City (he's taller, greener, and has more leaves than ever before).

I believe that he is a barometer and not a crystal ball. If our plumber, who is currently working on our toilet, has a fit of rage, becomes homicidal, and snaps The Doctor's spine over his knee, I don't think we will suffer a similar fate.

But it's actually nice to have a living friend in the house, who can empathize with my wife and I, but never rants about his fledgling relationships, drunkenly whines about his job frustrations, argues over politics, or does any other annoying thing that human friends inevitably do when you maintain a close relationship with them.

So we're a tad less ego-centric, and though I still don't want a pet, I think I'll put Revolver on and give my buddy a fresh cup of water.